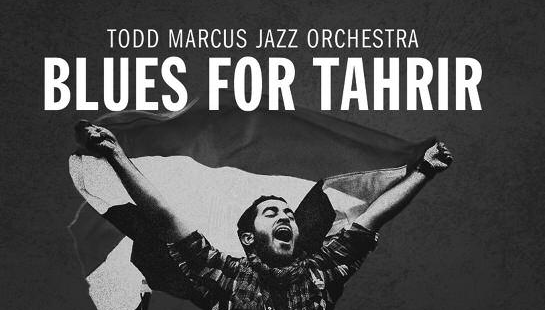 Baltimore-based bass clarinetist, composer, and bandleader Todd Marcus has mastered his own destiny with his latest release, Blues For Tahrir (Hipnotic). On this new release, Marcus and his Jazz Orchestra hit all the crucial marks for ensemble playing and expressive improvisation to bring these compositions to life. Marcus’ s work here has a strong Middle Eastern influence, which is evident in many of the main melodies; indeed, the theme of the album is an exploration of Marcus’s Egyptian heritage, as well as a programmatic expression of the recent political and social upheaval in Egypt. However, this above all is a modern jazz record that resembles the work of composers like Jamie Baum, Michelle Rosewoman, and Kenny Wheeler, if not John Coltrane and Duke Ellington. Furthermore, the improvisations from Marcus and alto saxophonist Russell Kirk (and to a lesser extent tenor saxophonist Greg Tardy) show the strong influence of Baltimore’s own musical original, Peabody jazz program director and tenor saxophonist Gary Thomas. Add in other Baltimoreans— bassist Jeff Reed, drummer Eric Kennedy and percussionist Jon Seligman, as well as my former Peabody classmate and now Peabody professor, trumpeter Alex Norris— and this music is as much about the state of jazz in Baltimore as it is about the state of Egypt.

Although this is described as a Jazz Orchestra, it’s really more of a large chamber group, and the balance of ensemble playing and solo space throughout Blues For Tahrir is superb. Marcus knows how to combine bass clarinet, flute, trumpet, alto, and trombone in a way that is impressive without trying too hard. The bass clarinet in ensembles like this often doubles the bass line (or the piano, as on “Many Moons”) or merely adds exotic color (I’m sure you could ask bass clarinetist Benny Maupin about that!), but Marcus insists that the bass clarinet can also be upfront. Marcus often solos in the mid to high register of the instrument, weaving complex lines that surely show the influence of Thomas’s linear concept. Marcus features himself sufficiently without denying his excellent bandmates some chances to blow. I wasn’t familiar with alto saxophonist and flautist Brent Birckhead but he takes a marvelous turn on “Protest,” with an aggressive post-Coltrane, post-Kenny Garrett type of blowing against a modern version of stop-time.

“Alien” features solos from virtuoso trombonist Alan Ferber and pianist Xavier Davis, who throughout the album shows his considerable prowess as an accompanist. The rhythm section of Davis, Reed (who has a beautiful feature on “Tears On The Square”), Kennedy (who burns it up on “Washouli”) and percussionist Seligman (who is also an incredible drummer) is the foundation of this group and helps to solidify the music. (One thing I noticed while listening to “Reflections” is that whatever drum Seligman is playing has an overtone that clashes with the G7 suspended sonority prevalent throughout the section. It’s not a bad thing; it adds to the exoticism. I’m not sure if it was intentional but it sounds cool.) I was a bit concerned at first about where “Summertime,” George Gershwin’s classic, was going to fit on this recording, but Marcus puts his own stamp on it, and most importantly, gives Norris a chance to burn.

Todd Marcus has really come into his own with Blues For Tahrir. It’s a showcase for Marcus’s playing, writing, and thoughtful artistry.

George Colligan is a jazz pianist/composer/educator who grew up in Columbia, MD, and now resides in Portland, OR. His CD Risky Notion, with his new group, Theoretical Planets, was released in January of this year. Look for it at Origin Records: http://originarts.com/recordings/ recording.php?TitleID=8268