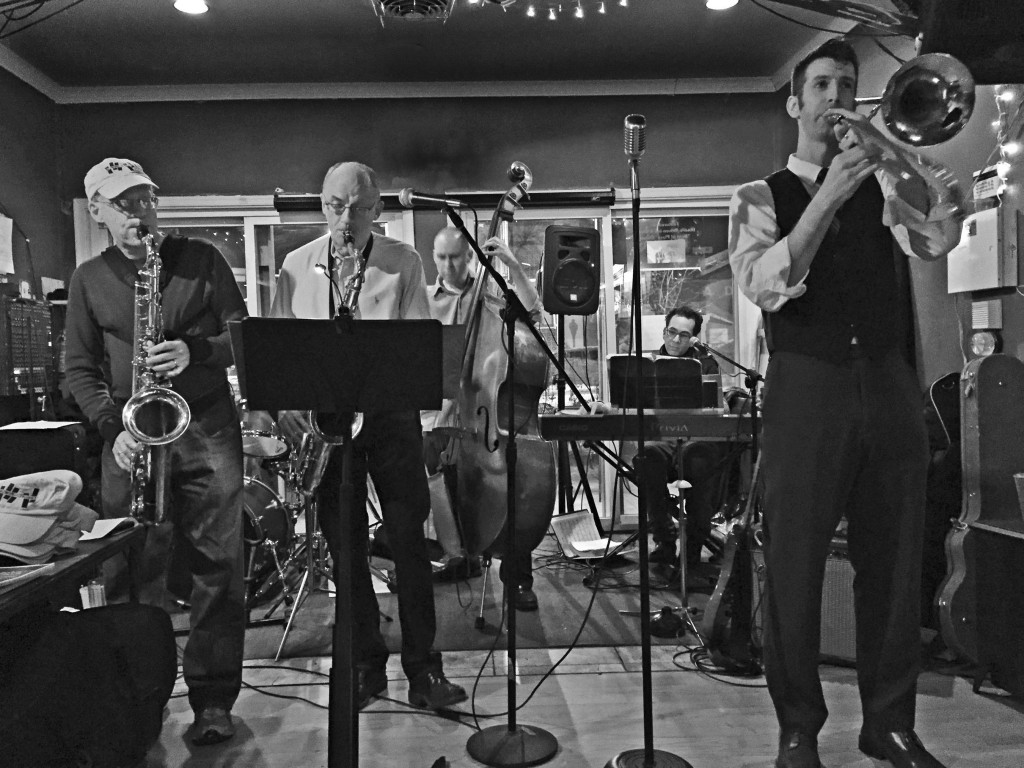 On a cold February evening at Joe Squared, in Station North, Baltimore jazz lovers gathered for the debut performance of “Hidden Agenda,” a band formed by members of the board of the Baltimore Jazz Alliance. Although all of the band members play with their own groups and although some have performed together, this was the first time that the five of these individuals had done a gig together as a band.

The secret to Joe’s great pizza is their super-hot oven; and that also seemed to work for the jazz, which was served up nice and hot. The band featured BJA President Mark Osteen, of Cold Spring Jazz Quartet, on tenor sax and vocals and BJA Vice President Bob Jacobson on tenor sax and clarinet. Look for Bob’s band, Sounds Good, around the Baltimore scene. BJA Secretary Liz Fixsen was on keyboard and vocals; her band, Moonstruck Jazz, plays private gigs in the Baltimore-DC area. BJA Web Guru Ian Rashkin held down the bottom end. You can hear Ian around town with his own group, The Dogs of Jazz, and also with Jazz Jones. BJA members Wes Crawford, who plays regularly with the Bay Jazz Project and teaches at Goucher College, supplied the beat; and BJA board member Brad Gunson, front man for Gunson Roses and the MC for the evening, played guitar and trombone, and sang.

The show opened with some well-chosen favorites, including “Blue Monk,” “Black Orpheus,” “Nostalgia in Times Square” and “Up Jumped Spring,” which allowed each performer to stretch out. They also aptly demonstrated when “It Don’t Mean a Thing if it Ain’t Got that Swing,” on “Tenor Madness” and on Gunson’s rendition of “After You’ve Gone.” Osteen gave us our Bible lesson with “It Ain’t Necessarily So,” after which we were all mercifully excused from Sunday service.

The second set was a jam session, with Lewis Jones, Erik Lund, and Chuck Michaels sitting in on drums; Joshua Kranz, visiting from L.A., on keyboard for “Autumn Leaves”; and Russ Rodgers, from Rockville, sitting in on electric bass. The band mixed it up with “Samba de Orfeu” and “Jitterbug Waltz,” and then picked up the tempo on “I’ve Found a New Baby.” They soared through Charlie Parker’s “Anthropology,” and nailed the standards “But Not for Me” and “My Romance.” Liz Fixsen treated us to beautiful vocal renditions of “At Last” (my personal favorite) and “Georgia,” while Mark playfully put us in our places with Mose Allison’s “Your Mind Is on Vacation.”

Let’s hope that this dynamite collaboration will be heard at future jazz events in Baltimore!