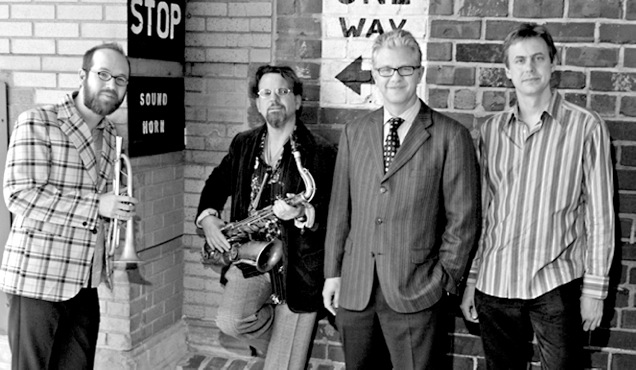 by Michael Raitzyk
On March 20th, drummer/bandleader/composer Matt Wilson brought his quartet (with guest John Medeski) to the Creative Alliance to play two amazing sets of music. Most of the music was from Wilson’s new CD, Gathering Call (Palmetto Records). The players in the band-—Jeff Lederer on tenor saxophone, soprano saxophone and clarinet; Kirk Knuffke on cornet; Chris Lightcap on bass; Matt Wilson on drums, and John Medeski on piano-—played through a wide swath of jazz history, from swinging Duke Ellington to intergalactic spaceman Sun Ra.

Wilson has appeared on 250 CDs as a sideman and has released nine as a leader for Palmetto Records. He has impressive command of the drum set and provides musical, rhythmically grooving support at all volume levels. As a drummer friend of mine noted, “I wish every drummer in Baltimore could hear his use of dynamics. What an education!” He digs deeply into the tones of his drums and cymbals. One of the highlights of the evening was an extended high-hat solo. I had not heard anything like that since the Max Roach Quartet played at the Left Bank Jazz Society.

Decked out in a three-piece suit, Wilson kicked off the show with Duke Ellington’s “Main Stem.” After solos from Lederer and Knuffke, the band went into Wilson’s composition, “Some Assembly Required,” a tune with drum breaks played artfully by Wilson. The third tune was another Wilson composition, this one a ballad entitled “Dancing Waters.” It featured a beautiful bass solo from Lightcap, whose tone was absolutely gorgeous. Other tunes in the set included a boogaloo in 5/4 (“Get Over, Get Off & Get On”); the pointillistic Butch Warren composition, “Barack Obama”; the collective free-blowing Wilson composition “Gathering Call” (think of Coltrane’s Ascension album); and the first set closer, “You Dirty Dog,” another Ellington composition. I can’t remember the last time I heard so much Ellington at a show. These tunes gave pianist Medeski a chance to combine the spirit of Ellington’s piano playing with his own jam-band-harmonic hijinks. The pieces also highlighted Wilson’s arranging chops.

At one point, Wilson came out from behind the drums to talk to the audience. He told us a hilarious story (a clever sales pitch) about leaving his children (he has triplets + 1) to go on the road. “I hear the people in Baltimore are kind and will buy your CDs, daddy. Is that true?”

The second set opened with the entire band entering the stage, each playing a hand-held bell from a children’s toy (?) bell tree. That kind of creativity at that dynamic level really brought the audience and the musicians together. This entrance segued into the beautiful Wilson ballad, “Hope for the Cause.” The second set also included “How Ya Going” (reminiscent of Ornette Coleman, 1960) and “Dreamscape,” both Wilson tunes. The band also played a tune with a Klezmer/Middle Eastern flavor. The set ended with the Charlie Rouse composition “Pumpkin’s Delight,” a blues where everyone made a final statement. (Hi) Hats off to Josh Kohn at the Creative Alliance for daring to bring in the kind of creative music Baltimore loves! 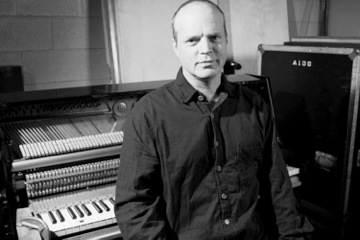