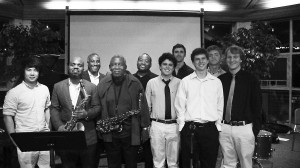 On that warm late summer afternoon, with sunlight splashing over the landscaped lawn outside the Ward Center for the Arts at St. Paul’s School in Brooklandville, the artistry of the Carl Grubbs Ensemble and special guest Jaleel Shaw perfectly matched the natural beauty of the rolling hills and lush trees surrounding the venue.

The occasion on September 20th was the annual John Coltrane Celebration Concert. A large, capacity crowd gathered in the Ward Center to hear saxophonist and senior jazz statesman Grubbs, who led off each set playing with his St. Paul’s Jazz Band students.

A Philadelphia native who settled in Baltimore in the early 1980s, Grubbs received lessons as a youngster from Coltrane, who was married to Grubbs’s cousin, Naima. Grubbs went on to make his own name in the music and earn laurels as an educator as well as a dynamic musician, composer and bandleader. He has taught at St. Paul’s since 1994 and has been Director of Jazz Studies since 1997. He has also been an instructor at summer jazz camps for many years, both in Baltimore and elsewhere in Maryland.

That night in September, after the young folks played smartly with Grubbs on a few mainstream tunes, they gave way to Grubbs’s group, comprising Shaw, Eric Byrd on piano, Blake Meister on bass, and drummer John Lamkin III. Shaw, who has played with Jimmy Cobb, Orrin Evans, Robert Glasper and is currently a member of the Roy Haynes Quartet, was named a Rising Star on alto saxophone in the 2014 Critics’ Poll in DownBeat. He and Grubbs often led off a tune with rousing harmonies on their alto saxophones, then soloed, and then gave ample space for their band members to display their improvising talents.

Byrd is a veteran Baltimore pianist who leads his own group and is active in both the jazz and gospel worlds. Meister is a rising star bassist who teaches at the Peabody Institute in Baltimore. Lamkin III has been one of Baltimore’s, and the industry’s, top drummers for several years and almost stole the show with his bristling work during the Grubbs Ensemble’s February Black History Month concert in Randallstown.

On the standard, “Four,” Shaw delivered winding, fluid lines on his alto, while Grubbs answered with searing, shimmering lines of his own. Meister grooved solidly on bass, spicing his playing with inventive licks; Byrd rippled with charm on piano and Lamkin powered things along all evening with crisp, efficient raps and rolls and symphonic cymbal work.

Shaw was featured on “My One and Only Love,” blowing golden melancholia that evoked longing and need and desire. On Joe Henderson’s “Recorda Me,” Grubbs and Shaw were at it again, leading off the tune with ripping, roaring harmonies, before the group romped through the tune for one of the evening’s highlights, with Lamkin again dazzling on drums.

During each set Grubbs would pause at some point to talk about how far Shaw had come since Grubbs met him in Philadelphia many years ago when Shaw was a teenager. Shaw in turn said what an honor it was to come to Baltimore and play with Grubbs.

As night fell in the hills surrounding St. Paul’s and the darkness outside the windows lent a more traditional jazz club feel to the proceedings, Grubbs and company kept delivering solid readings of songs associated with Coltrane, such as “Blue Train,” “Lonnie’s Lament,” “Autumn Leaves,” “Bessie’s Blues,” “26-2” and others.

On the night’s final tune, Grubbs and Shaw and friends closed out the enjoyable jazz family night with an impressive “Giant Steps.” Shaw was again fluent and intense, and Grubbs showed his mettle by providing the “bite” with his soaring solo, at times seeming still to be giving lessons to his young charge—and reminding him that while he has come a long way, he has a ways to go to match his mentor in complexity, lyrical innovation and dramatic tension.

Steve Monroe is a freelance writer based in Washington, D.C. He can be reached at steve@jazzavenues.com