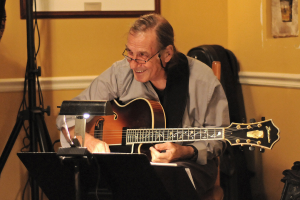 By Liz Fixsen..
With the death of guitarist Paul Wingo on September 11, 2014, the jazz community of Baltimore and the entire Washington DC region has been mourning a musician who for over thirty years has been an institution at Bertha’s Pub in Fell’s Point. Every Tuesday night, he’d be there with his trio, perched on a stool in the front corner, with his little reading glasses half-way down his nose, playing jazz standards with inimitable style and finesse to a small coterie of jazz cognoscenti clustered toward the front of the pub.

Paul was among the stalwarts of jazz in the entire region and performed with many of them. In commemoration of his passing, I gathered thoughts and recollections from several Baltimore-area musicians who played with Paul or learned from him, including Jeff Reed, Kevin B. Clarke, Charlie Sigler, Seth Kibel, and Steve Abshire.

Bassist Jeff Reed played Tuesday nights with Paul for twelve years after taking over the gig from Paul Langosch. Jeff says, “It was incredibly cool to play with Paul. He created such an open, loving, and generous environment.” Paul made it easy to play well, says Jeff — he wanted to bring out the best in his fellow musicians. “There was something spiritual about the way he wanted to uplift everyone in the world.”

Jeff said that there was always a great sense of rapport between the musicians and the audience at the Bertha’s sessions. Paul said that the listeners helped to create the musical event as much as the musicians. He never put out a tip jar; he never wanted anything in return for his playing. But “people would just throw money at us,” says Jeff. “They’d leave it on my music stand.”

When Jeff took a few lessons with Paul, Paul would say to him, “This isn’t just for you—it’s also for all the students that you will be teaching. You’ll pass it on to them.” “Paul would talk about the deep oneness of all humanity,” recalls Jeff. “Paul felt that separation is an illusion, because we are really all one, and there is one true self in each person…when you’d look into his eyes, it was like looking into a mirror – you saw yourself. He treated everyone as an equal.”

Jeff says that Paul lived his whole life with acceptance of whatever was happening – whether he received praise or disapproval. So when he found himself diagnosed with lung cancer, he faced it with calm acceptance – and the disease took him quickly.

Kevin B. Clarke, a young guitar prodigy from Peabody, also shared his thoughts and reflections on Paul. He first met Paul at Bertha’s in winter of 2012, at a celebration of Paul’s birthday. He spoke briefly to Paul, saying that he enjoyed hearing him play. As Kevin recalls, “Paul said ‘thanks’ with that signature smile of his, where it felt like he could see something that no one else was noticing, and was getting a bit of a kick out of it.” A few months later, Kevin came back, and on recommendation of Jeff Reed, got to sit in with Paul – which from then on he regularly did on Tuesday nights.

Kevin, like Jeff, learned much from Paul. “He produced such a great sound on the guitar, kind of out of the Jim Hall model but different, very unique… his chords were always full and lush.” Like Jeff, he recognized how Paul “would always be in complete sympathy with the other musicians he was playing with, like his purpose was to make them sound better.” Once Paul pointed out to Kevin how his comping needed to be more in sync with the other players, and Kevin says he recognized the truth in that advice and took it to heart. “He was always very kind and generous to me,” says Kevin, “and I considered him a friend and mentor. I know for a fact that I hear and experience music differently because of him, and I’ll always be grateful for that.”

Charlie Sigler, another up-and-coming guitar phenomenon from Baltimore who sometimes sat in with the Tuesday night trio, also remembers Paul as a “very centered, kind, generous person.” He writes:

“His gig at Bertha’s was always a lesson in sincerity and musicality. He had a great narrative sense to his playing, and his improvisations and arrangements were always thoughtful but never felt contrived. He was a master of advanced harmony, but it always felt organic and grooving. I also felt what a deep relationship he had with the songs he was playing; he almost always knew the words to any standard he performed.

“He was very open minded, and I always enjoyed hearing him working out on a new Dave Holland song, or hearing him talk about his appreciation for younger players. He was a valuable witness to the history of this music, and his stories about interacting with Wes Montgomery and seeing John Coltrane stick with me to this day.”

Echoing Jeff Reed’s observations, Charlie says, “The thing that impressed me most about Paul was that he was … completely at home with himself, and he could sincerely communicate that clearly and beautifully through his playing and his being.”

Seth Kibel, Baltimore saxophonist and clarinetist extraordinaire, also shares appreciative thoughts about Paul, with whom he spent a year-and-a-half studying in weekly lessons:

“We covered theory, improvisation, ear-training, and just about anything we wanted to talk about and jam on. I’ve got a binder bursting with all the materials and notes I took during my time studying with him. That was about a decade ago, and I’m STILL processing everything I learned during our sessions. I suspect I’ll be doing so for a long time. Decades from now, I’ll probably be figuring out how to navigate some wacky substitution, and it will dawn on me, “Oh, THAT’S what Paul meant.” He left a permanent mark on me as a musician, and as a human being. He was (and is) my Jazz Yoda. And, of course, his Tuesday night gigs at Bertha’s are undoubtedly some of the best jazz most people have never heard.”

Guitar master Steve Abshire, who recorded the 2010 album Detour Ahead with Paul, knew Paul for 34 years and played many gigs with him. He writes:

“Of all of the musicians that I have played with, none did I ever connect with as well as Paul Wingo. Both on a musical level, but on a deeper spiritual level as well…One of the gentlest souls I have ever met. Paul was a “in the moment” musician. Whatever direction the music took us, he was there to welcome it and relish in that moment. I’ve never known a musician to be as intense a listener as player. Paul would react to EVERY note of music around him, with a smile or a laugh or tears at times.

“Paul’s sense of humor was another aspect of his personality that I thoroughly enjoyed about him. He had a very quick wit, and an infectious laugh that warmed any room he was in. Paul carried all of this onto the bandstand with him every time he played. So often Paul would play his guitar with his eyes closed, totally focused on the very beat of music that was going by.

“On our Detour Ahead CD, we played a duet, “There is no Greater Love.” In that recording, there are moments when it felt like we could both hear and understand what the other was thinking and would play what would best compliment it. Those times are very special to me.

“Paul introduced me to many musical concepts and he would often share how he approached a song, or even a musical phrase. He was such a selfless, giving man. I owe a lot to Paul Wingo, a dear friend and swingin’ guitarist. I will miss those special moments playing with him. He will be truly missed by his friends.”

Finally, I’ll share a short note I received from the charming and vivacious Laura Lee Dillon, who was Paul’s “significant other” for several years up to his death. She was still grieving too much to write at more length, but she said, “Our Love of ONENESS Will Live ON… He was My BMW — — my Beautiful Man Wingo!”

Truly, for all of us, he was a beautiful man and a wonderful musician who will be greatly missed.

Although he recorded as a sideman with many other jazz musicians, Paul waited 40 years to record an album under his own name. Live@Bertha’s came out in 2007, from a 1998 live recording of a Tuesday night show (with one track featuring saxophonist Al Maniscalco, who dropped in that night). Jeff Reed played on that album, and Paul’s long-time drummer Chuck Karner. Jeff says that night was magical– although the trio tried three times to do another live recording at Bertha’s, they never succeeded. All kinds of commotions would happen in the middle of a song – a glass would drop, or there would be a scream of laughter from the bar. Once in the middle of a touching moment in “Moonlight in Vermont,” a chair fell loudly on the floor.

Peac*ing It Together, a studio recording, was also released the same year. Both albums included Chuck Karner on drums and Jeff Reed on bass — with one rare vocal track by Paul in his gravely voice.

In 2010, Detour Ahead was released, featuring Paul Wingo and Steve Abshire. A fourth album, Live@Blues Alley, recorded in 2013, has an uncertain availability at this time.

Additional links about Paul Wingo:
•An article about his career at Bertha’s, April 2012, by Bob Jacobson, in the BJA Newsletter: https://www.baltimorejazz.com/2012/08/baltimores-longest-running-jazz-gig/
•Bio on the Kennedy Center Website: http://www.kennedy-center.org/explorer/artists/?entity_id=14738&source_type=B
•Review of Peac*ing It Together, by Paul Westerbrook in JazzReview.com (on the website of Cherry Valley Music, where Paul taught): http://www.cherryvalleymusic.com/store/page32.html
•Liner notes in Peac*ing It Together, by Tom Cole of NPR