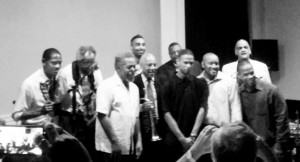 Co-emcee John Lamkin II told us that we were witnessing something that had never happened before in Baltimore. Ten musicians, ranging in age from their mid-twenties to early eighties, filled the stage at An die Musik. The concert space was bursting at the seams with ninety enthusiastic patrons. Billed as “Father’s Day Baltimore: Father and Son Celebration,” the occasion featured the father/son pairs of Charles and Kris Funn (on trombone and bass, respectively), Rodney Kelley Sr. and Jr. (guitar and piano), John Lamkin II and III (trumpet/flugelhorn and drums), Whit and Tom Williams (saxes and trumpet) and Warren Wolf Sr. and Jr (percussion/vibes and vibes/piano). Three of the younger generation—Kris Funn, John Lamkin III and band leader Warren Wolf Jr.—had just flown in from a Jazz at Lincoln Center-sponsored two-city tour of Mexico. That’s the caliber of young musicians from three of these families. But not only did the jet-setters play great jazz that night; everyone on stage was at the top of his game.

According to Warren Wolf Sr., the father/son concert had been in the talking stages since 2010. Certain details had obviously been arranged: the tunes chosen, the soloists selected. But beyond that, the show was essentially a jam session that included many spontaneous moments. John Lamkin III played a drum solo to kick off “A Night in Tunisia,” and was replaced, without any missed beats, by Warren Wolf Jr., then by Warren Wolf Sr. At one point in “Blue Monk,” Kris Funn urged his father to move from trombone to bass, and a terrific solo ensued. On the same tune, Warren Wolf Sr. took over soloing on vibes from Warren Jr. All these surprises generated excitement among the audience.

The repertoire was all standards. In addition to the tunes mentioned above, they included “In a Sentimental Mood,” “What Is This Thing Called Love?,” “Sugar,” “Someday My Prince Will Come,”and “Body and Soul.” Rather than give a play-by-play of the whole show, I’ll mention some aspects that struck me the most. On “Body and Soul,” Whit Williams’s tenor sax solo proved that he is still a master of expression and interpretation.The oldest son on stage, Tom Williams, played crisp solos full of wonderful passages, particularly on “Someday My Prince Will Come.” The youngest person on stage, Rodney Kelley Jr., took agile yet sensitive solos throughout. I’m familiar with the younger Kelley’s skillful contemporary jazz playing on electric piano, but I had no idea that his mainstream jazz chops were so well developed. After the show Rodney Sr. made sure to point out that although George Duke was Junior’s keyboard hero, his early home-based musical education included plenty of Oscar Peterson and Ramsey Lewis. I’m pretty sure that I heard some McCoy Tyner influence in there too.

Buoyed by the success of this concert, Warren Wolf Sr. hopes to take the show to a bigger venue next time. Charles Funn is talking about presenting another father/son program around Christmas, when his other son, trumpeter Kyle, will be in town from Los Angeles.