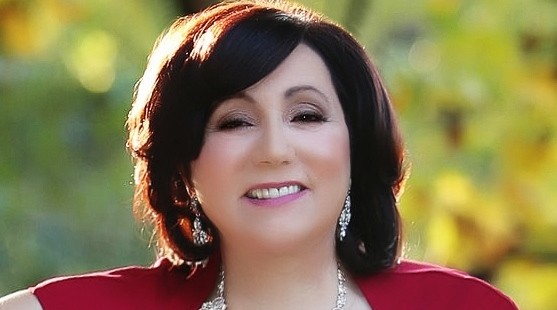 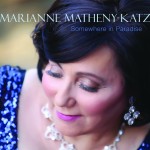 by John Tegler. Over the years, I have been privileged to write many record and CD reviews, as well as liner notes. Never, in all those years, have I found one that did not have at least some artistic or technical failings.

Well, it has happened. Marianne Matheny-Katz’s new CD, Somewhere in Paradise, comes as close to being perfect as any I have heard! The vocalist herself delivers the material superbly, with no affectations or gimmicks and with a great jazz sensibility. The participating musicians are outstanding as well, giving her great support in addition to wonderful solo and ensemble work. In the best jazz tradition, she gives them ample blowing space and does not grab every moment for herself as many vocalists are wont to do.

The entire CD is done in excellent taste with a great choice and variety of tunes and tempos. The arrangements, mostly by Warren Wolf and Todd Marcus, are creative and attract the listener’s attention. These charts make excellent use of the very talented sidemen, including reedmen Tim Green, Craig Alston, and Todd Marcus, the trumpet of Terrell Stafford, the piano of Vince Evans, the bass of Eric Wheeler, the drums of Eric Kennedy and the vibes and all-around musicianship of Warren Wolf. Along with the talents of Marianne Matheny-Katz, this is an embarrassment of riches!

The CD kicks off with the Gershwins’ “Our Love Is Here to Stay” done beautifully, with tasty Vince Evans piano. Matheny-Katz, right off the bat, is so comfortable it’s almost like George wrote it for her; I’m sure Ira would have approved of the little changes in the lyric. The second tune, Benny Golson’s “Whisper Not,” proves immediately that this woman is not just a vocalist but a jazz vocalist! It includes some sharp voicing of the horns, a nice stop time and fine vibes by Mr. Wolf.

Miles Davis’s “All Blues” is not an easy song to sing, but Matheny-Katz carries it off beautifully, with tasty backing and solo trumpet by Stafford. The fourth number, Kenny Dorham’s “Fair Weather,” is beautifully done by our vocalist, again with superb trumpet work by Stafford. This is my least favorite tune on the CD, but that’s no reflection on the singer or the band. The singer and band do it well, but the song kind of wanders and never seems to resolve itself.

“Comes Love” has a rollicking blues feel with a whimsical singer having fun. With a nice bass lead-in by Wheeler, the whole thing cooks, with Green’s and Alston’s saxes perpetuating the feeling. Marcus’s bass clarinet sets a different mood for “The Way You Look Tonight,” and our vocalist picks up on that mood very well. Love the tempo changes!

One sometimes forgets what beautiful music Thelonious Monk wrote. “Still We Dream,” originally “Ugly Beauty,” is a difficult song to sing, but Matheny-Katz pulls it off with great control of her voice, reminiscent of our late friend Ronnie Wells. Wheeler’s bass work is fitting and imaginative.

I do, I do, I do “Believe in Spring.” I give thanks to Matheny-Katz for doing it the way that Legrand and the Bergmans intended it to be done! This tune also includes more superb alto from Green and vibes from Wolf. McCoy Tyner’s “You Taught My Heart to Sing” likewise shows an outstanding vocalist telling a story. The ensemble work is particularly outstanding and I loved the ending. However, I’ve never liked “Look for the Silver Lining.” For me it smacks too much of vaudeville and Jolson’s “You Ain’t Heard Nuthin’ Yet” era. However, Marianne Matheny-Katz and the horns made me like it.

If I were given one of the famous blindfold tests and did not know the personnel in this band, I never would have known that they were a group of Baltimore musicians. Kudos to them and, most of all, to a lady who joins the ranks of the world’s best female jazz singers—and with her first CD release. It isn’t paradise, but it’s darn close to it.

By the way, I was reviewing this CD when one of my sons, Eric, walked in, listened a minute or so and said, “There’s a vocalist I could tolerate. That’s the best thing I’ve heard in a long time. That vocalist and the group backing her should be working in New York and at festivals all over the world!” ‘Nuff said.