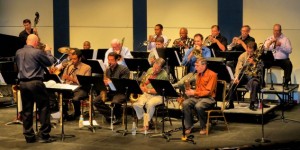 BJA BIG BAND PREPARES NEW FALL CONCERTS. Under the direction of founder, Anthony Villa, the Baltimore Jazz Alliance performs the original jazz music of Baltimore area composers. Formed in 2011 under the auspices of the Baltimore Jazz Alliance and with generous support from Loyola University Maryland, the BJABB presented its first concert in September 2011. The BJABB solicits original scores and supports the creation of new jazz works for big band. Interested parties, including composers, arrangers, instrumentalists, and concert presenters, should contact Anthony Villa at anthonyvilla@arditomusic.com.

He says of the tune:

“Robo-Dial expresses my fury at the anonymous forces of evil whose nefarious companies, systems, and devices persist in plaguing my life with unwanted telephone calls. The intro was formerly a stand-alone piece written as a brief springboard to improvisation for the group “Diagram 4,” and after months of having it bouncing around my brainpan, I decided to flesh it out into a full-blown piece.

Recordings of other 2013 BJA Big Band performances can be found on a separate page, linked at the top of the homepage.