A TRIBUTE TO RUBY GLOVER – BALTIMORE’S GODMOTHER OF JAZZ 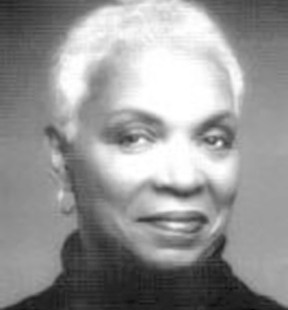 Baltimore’s jazz treasure, vocalist Ruby Glover, was the headliner at the Creative Alliance at the Patterson on an unseasonably warm Friday, October 19th, 2007. That evening, she sang two songs and then collapsed with a stroke, beginning her transition into jazz history at the age of 77. I remember that I was on a vacation at that time, but when I heard about her passing, I knew I wanted to attend any remembrance of this gifted woman who had been such a supportive mentor, role model, and inspiration to me.

Glover would have been 84 on December 6th, 2013. Blues/gospel/jazz vocalist Lea Gilmore, visual and performance artist Joyce Scott, poet/actress/storyteller Margaret Locklear, R&B/neo-soul singer Marc Avon Evans and comedienne Sheila Gaskins gathered at the Patterson on December 7th to pay tribute to the Godmother of Baltimore Jazz with songs, memories and . . . lots of humor! The program’s description: “Ruby Glover was one of the greatest champions of jazz Baltimore has ever known. From singing in the chitlin circuit theaters in the ‘40s and ‘50s to teaching jazz vocal technique and appreciation to helping found the Billie Holiday Vocal Competition, Madame Glover was a petite, gracious, and beloved artist of Bmore.” This tribute helped raise funds for Baltimore Voices, a group of young singers from Franklin Square Elementary/Middle School led by Gilmore, who are hoping to perform in Scotland.

Creative Alliance co-founder Megan Hamilton opened the evening by thanking Ruby Glover for her service to jazz. In 2007, the family allowed Ms. Hamilton to stay present until Glover’s final bow the day following her brief show. Hamilton noted that upon her passing, “Ruby’s countenance was serene and regal. She was as a queen dying, justly proud of her reign.”

The emcee for the tribute, Sheila Gaskins—who was there that fateful night in 2007 along with Gilmore and others onstage and in the audience—inserted humor into the intros and bios of each performer. Gaskins also noted that she and Gilmore have kept a tradition of going to Ruby Tuesday’s restaurant on Tuesdays.

Locklear, who was also present in 2007, was the first performer to salute Glover, saying, “Ruby was my mentor and best friend.” Her poetic tribute concluded with a sentiment that would have resonated with Glover: “Don’t miss me. Keep me in your heart always.” The band Classically Blue, consisting of musical director/pianist Derrick Thompson, bassist Mitchell Coates and drummer Jesse “Jay” Moody III, played “All Blues” behind Locklear’s poignant salute to her friend.

The second offering was Joyce Scott’s rendition of “Ruby (It’s You)” by Mitchell Parish & Heinz Roemheld. “They say, Ruby, you’re like a dream.” Scott gave a comedic introduction for Gilmore to join her onstage for a duet on “Ain’t Misbehavin’.” Glover and Gilmore met when Gilmore was just 21 years old, performing in Ain’t Misbehavin’ at Arena Players. Glover offered her free lessons and correctly predicted that Gilmore would one day have a career in Europe. The lyrics of Gilmore’s solo number, “My Handy Man,” fit in well with the ongoing, sometimes bawdy, humor of the evening.

Joyce Scott’s powerful vocal version of Chick Corea’s “Spain” was a highlight of the evening. Before beginning, she noted that attempting this challenging song was probably a mistake. She then proceeded to dazzle the audience, provoking an instantaneous standing ovation. She made it into her own personal soliloquy with a delivery that grabbed you from the very first note. She scatted, warbled and whined her amazing, high-velocity improvisations and even inserted a joke in the middle of the song.

Evans, who first met Glover in the ‘90s, offered a gorgeous version of the standard “You Don’t Know What Love Is.” Later in the program, he contributed a startling a cappella rendition of “Tomorrow” from the musical Annie and his velvety voice melted over “Autumn Leaves.”

Joyce Scott impressed with her treatment of Jill Scott’s “A Long Walk,” with Gilmore eventually joining her for some scat trading. Gilmore declared, “Ruby always made me feel so good!” and then segued into Nina Simone’s “Feeling Good.” Later she presented a song from Glover’s repertoire, “Since I Fell for You,” with a soft, affecting, dramatic ending.

The evening’s strong comedic theme continued in the second set with a Jackie “Moms” Mabley routine by Gaskins. After Scott announced that the next song would be her original, Gilmore joined her for a fun duet on “Mack the Knife,” including some on-the-spot lyric additions. Gilmore followed this up with “Fever,” a silky smooth voice and bass duet with Coates. It was funny to see the musicians doubling over their instruments laughing at the comedy even when they were the butt of the jokes!

Gilmore’s duet with Thompson, “If I Can Help Somebody,” drove home the oft-repeated description of Ruby as a supremely supportive mentor and friend. The rousing group finale was “It Don’t Mean a Thing If It Ain’t Got That Swing.” If Ruby Glover was watching from beyond, I’m sure she was feeling the love of her friends and feeling quite pleased, entertained and laughing very hard!