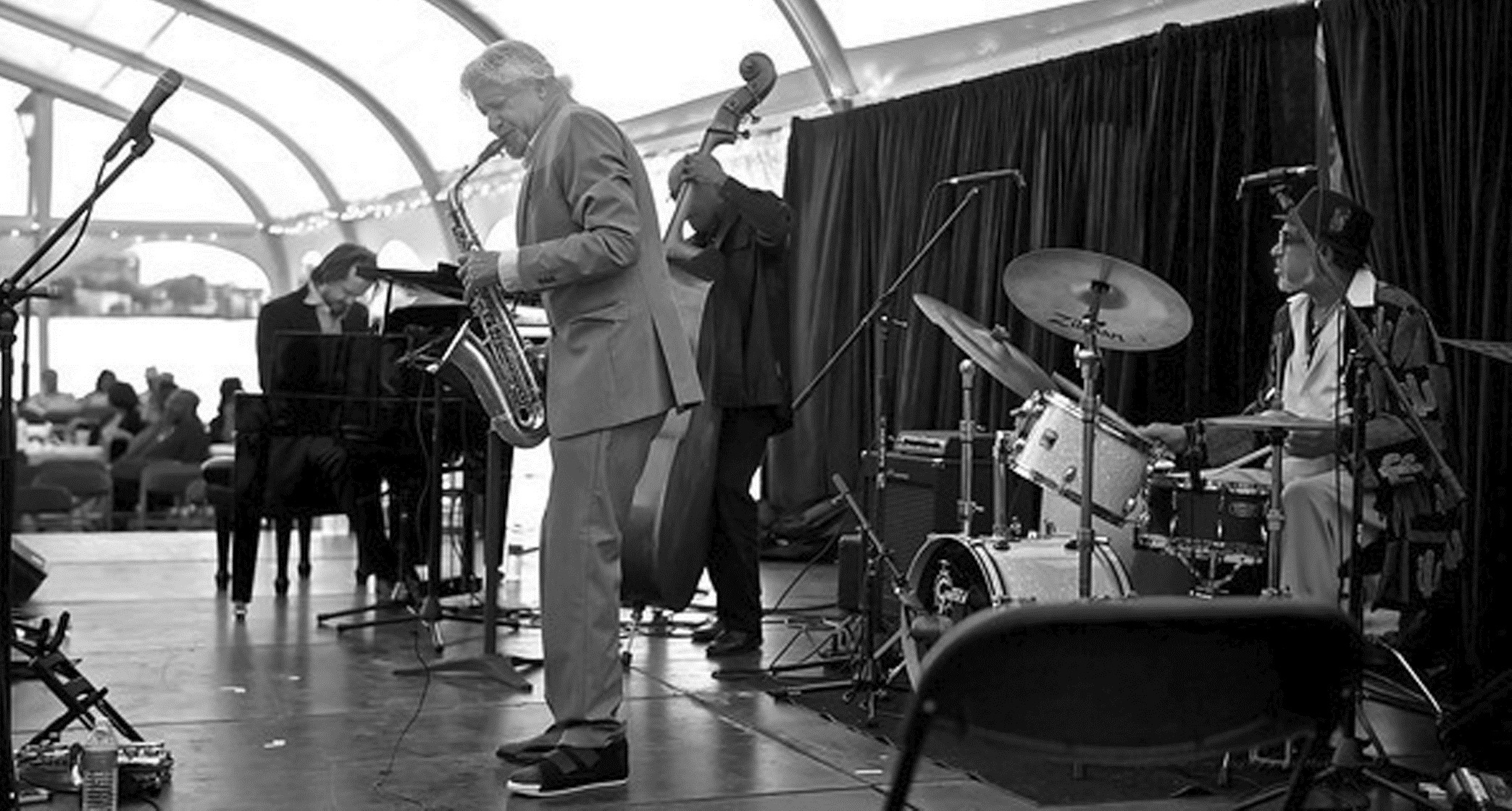 After a ten-year hiatus, alto saxophonist Gary Bartz returned to perform in Baltimore in September. Several hundred audience members jammed the pier of the Douglass-Myers Museum on Sunday, September 29th in Baltimore’s Fells Point neighborhood to celebrate what turned out to be Baltimore’s first jazz festival in years. Hosted by Associated Black Charities, the event was called “Jazz on the Waterfront” and featured a full day of jazz performances culminating with the return of Baltimore native and alto sax legend Gary Bartz.

Held outdoors under a majestic clear-top tent, the event lined up with an absolutely beautiful fall day that brought a near-capacity crowd to the waterfront location. Sailboats gliding by only added to the high-class feel of the event, which featured five bands and emcee dignitaries from WEAA (88.9FM).
The afternoon kicked off with a set by pianist/vocalist John Milton Wesley before introducing bass clarinetist Todd Marcus and his jazz orchestra. The nine-piece Baltimore-based ensemble featured its arrangements of jazz standards by Gershwin and Bennie Maupin in addition to originals (including Marcus’s Middle Eastern-influenced “Blues for Tahrir Suite”) from its recent album Inheritance, a pick by NPR as one of the top ten jazz albums of 2012.

Texas violinist Chelsey Green, a Peabody Conservatory graduate whom Stevie Wonder has called “simply wonderful,” followed with a powerful set by her band, the Chelsey Green Project. The band mirrored the Todd Marcus Jazz Orchestra by offering a modern jazz ensemble, fronted by an instrument not commonly used as a lead in jazz. The band performed Green’s classically influenced tune “Pizzicato,” other originals, and fresh interpretations of jazz standards, including “My Favorite Things” as well as jazz treatments of contemporary R&B titles.

The Curtis Brothers, a Latin jazz ensemble headed by brothers Luques and Zaccai Curtis, continued the afternoon with an energetic set. Already veterans at an early age through work with legends Herbie Hancock, Eddie Palmieri, Chick Corea, and Ralph Peterson, the brothers’ strong set showed why they have been called Heirs to the Throne of Afro-Cuban Jazz.

As dusk fell, stars shone through the clear-top tent to accent Baltimore’s own star and native son Gary Bartz. A legend for his work as a band leader, as well as for his performances in the bands of Miles Davis and McCoy Tyner, Bartz took the stage in Baltimore for the first time in over ten years, along with his working quartet of pianist Barney McCall, drummer Greg Bandy, and Washington, DC’s own James King on bass.

From the first notes, Bartz’s strongly recognizable alto saxophone sound captured the audience already savvy to the significance of his return to his hometown. Following the first tune, the audience erupted with enthusiasm, as Bartz shouted “Baltimore!” in warm recognition of the overdue homecoming.

The rest of the 90-minute set featured the Grammy-Award-winning saxophonist’s trademark approach of presenting his sets without talking between tunes, instead segueing from one number to the next with a seamless stream of music. Bartz and his ensemble laid down a sampling of his jazz chart-toppers that were met with the approving nods and “amens” of his fans new and old, who were repeatedly led to spontaneous standing ovations. His renditions of tunes like “I’ve Known Rivers” and a medley that teased the audience with favorites like “Music Is My Sanctuary,” along with originals such as “Soulstice” and “Uranus,” showcased his mastery of the music and demonstrated why he has become a legend.

Following the set, Bartz and the band were mobbed by fans seeking pictures and just a chance to say hello. Mr. Bartz graciously obliged them all, capping an evening of not only great music but of historical significance that saw a native son bringing his art back to the city where he began and, clearly, is still loved.

One thought on “GARY BARTZ RETURNS TO PERFORM IN BALTIMORE”