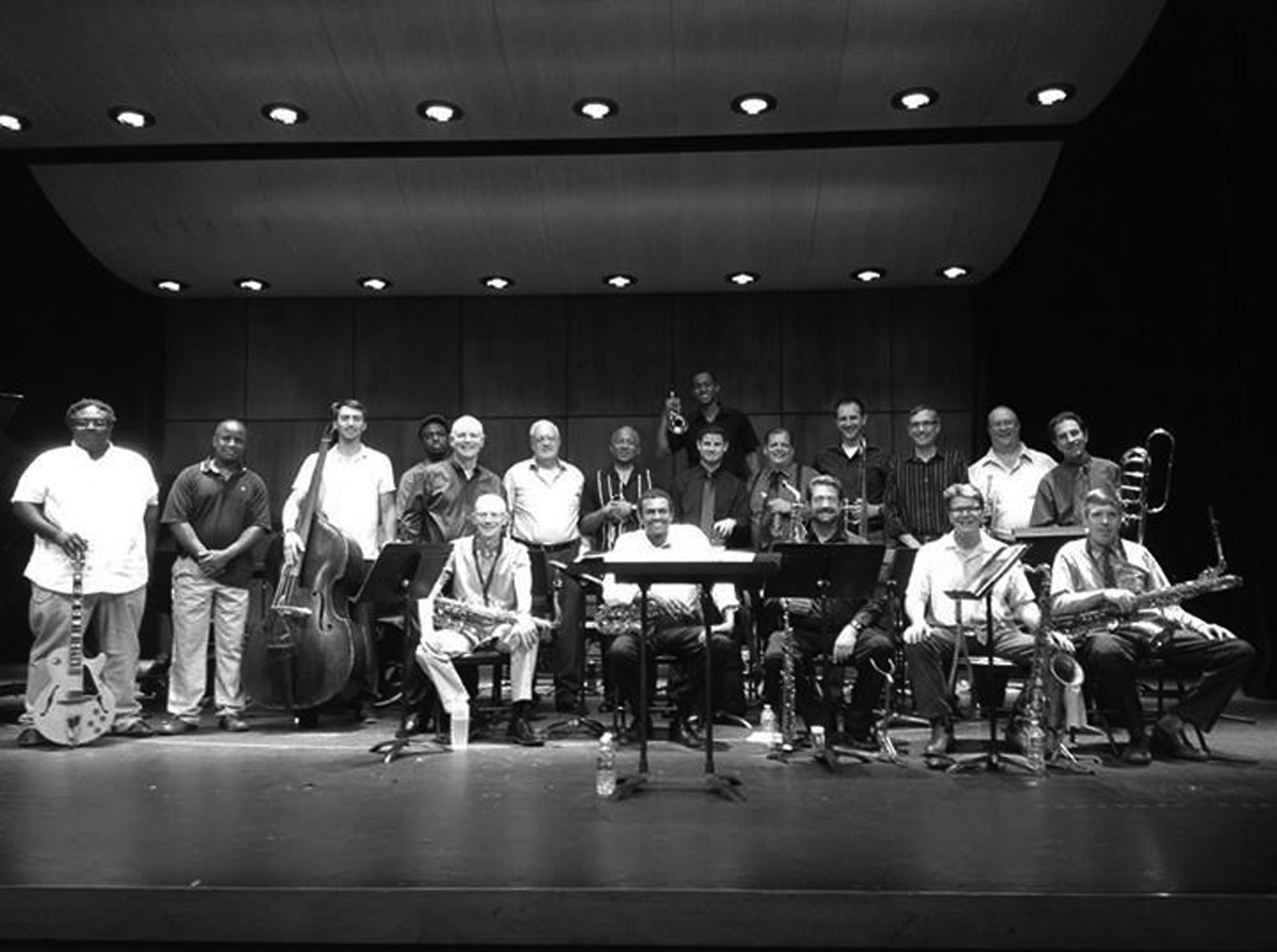 By: Chris Taylor.
As John Tegler of WEAA introduced the Baltimore Jazz Alliance Big Band, he painted a portrait of the group’s break from the traditional size and shape etched by Don Redman and Fletcher Henderson. Bursting at the seams, the BJA Big Band had stacked its reeds and trombones, augmenting the standard for a diversified wall of sound. While this could easily be a cumbersome feat, conductor and composer Anthony Villa guided the band with ease. To Villa, the BJA Big Band is a bastion of preservation, providing Baltimore-area composers with an outlet for their big band pieces to breathe the public air. There is a widening gap between a composer’s desire to write for big band and the chances of his or her piece being performed publicly, but the BJA Big Band extends a slew of talented hands to bring these works to life and continue the tradition of the big band in Baltimore. With this mission in mind, the entire program of the BJABB consisted of pieces composed by Baltimore-area musicians, with the exception of Mike Kamuf’s arrangement of Irving Berlin’s “Blue Skies.”

Creeping quietly, the brass section made it obvious that the “Blue Skies” of Al Jolson in The Jazz Singer were a long way away. As the bass sneaked in and the band built force, the group exploded into an extravagant rendition of the famed tune, even slipping a harmonic minor run in to leave you questioning where in the world these blue skies are. Midway through the piece, Mark Osteen’s tenor sax solo took the reins as the band followed his breakneck runs. Punctuating the piece, drummer Mark St. Pierre delivered the first of many solos packed with controlled ferocity and finesse.

“This Love I Dance,” the first original composition of the night, penned by the band’s resident multi-reed master, Paul Faatz, brought a joyful spirit with a contagious melody passing from section to section. The quasi-Caribbean motifs leaped about the band until Faatz’s clarinet solo pierced through in a pointed whisper. Gradually building, Faatz delivered the authoritative cue leading the band into a looming crescendo. Following this was a tune by conductor and composer Anthony Villa, entitled “Chiaroscuro (Light and Shadow),” evoking an ethereal and cloudlike feeling reminiscent of Chick Corea’s Light as a Feather album. Yet the open-voiced chords on piano and the whole-tone sax lines of Steve Scheinberg entered deeper and darker territory as the force of the band drove the piece into a much louder and aggressive arrangement.

In a moment of surprise, trombonist and composer Greg Boyer stepped out on stage after the introduction of his piece, “Faklempt.” Embodying its title’s Yiddish source, verklempt, meaning “flustered, tense, emotional to the point of tears,” Boyer’s altered blues was powerful and demanding. The crowd clapped with the rhythm section from the midpoint of the tune toward the end, leaving the band with huge grins across their faces. The composer was gracious enough to entertain us with a solo that traded pyrotechnic runs for gritty and guttural flourishes that grunted as much as they sang.

Making the transition to another trombone-playing composer, Richard Orr’s first tune of the night, “DC Shuffle,” was next. Leading with a conversational play with the melody between the tenor sax and trumpet, the shuffle passed around its motifs until the entire band got hold of one and bellowed it in six octave unison—a profound use of sound.

The band kicked off the second set with Benny Russell’s “Miracles,” expanding the piece from its original combo setting into a boisterous tune that switches from frenzied drum-heavy sections to airy swing. A smooth solo from Brian Robertson on alto sax ironed out the extreme dynamics of the band.

The second Faatz piece, “Robo-Dial,” kicked off with dissonant sounds of animosity that mellowed out to a metropolis of melodies filled with trumpet bursts that dropped off the swing feel in Shaft’s neighborhood. St. Pierre’s virtuosic drum solos leveled out the piece before the rhythm section backed down and let the brass end it with a dramatic parabola of sound.

In a whirlwind of dramatics and extreme tension, Orr’s “In Search of the Master,” brought his alma mater’s search for a bandleader to life. The piece was dark and brooding, weighing heavily upon the ear, until a spirited flugelhorn solo by David Smith pierced through the dissonance. Just as Orr’s subject in the piece, flugelhorn master Herb Pomeroy, transformed a fledgling ensemble into an experienced group, Smith’s solo eased the tension of the tune and brought the band to life. Spectacular.

Conductor Anthony Villa’s “Five Foot Six” culminated the evening with a tune that felt like Monk introducing Weather Report. With an intro delivered by Jake Leckie on bass and St. Pierre on drums, pianist Justin Taylor channeled Thelonious and led the tune into its more Weather Report-esque melody. The brass and reeds traded solos until the piece exploded into a finale that left the band facing a well-deserved standing ovation.