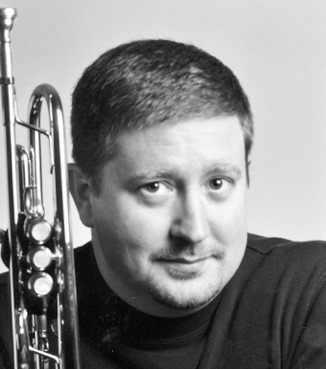 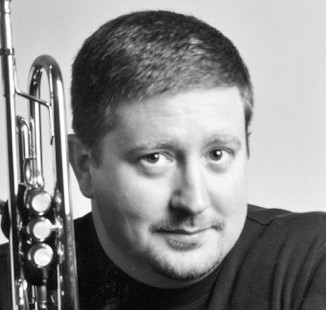 TODD BUTLER
Trumpeter/educator/bandleader Todd Butler is the veteran of the competition winners. He holds a Master’s Degree in Jazz Performance from Towson University (where he also earned his Bachelor’s) and studied extensively under the legendary composer and director Hank Levy. Butler led his critically acclaimed and popular jazz quintet in Baltimore for many years. Music Monthly magazine’s annual Readers’ Poll named The Todd Butler Group “Best Jazz Ensemble in the Baltimore/Washington Region” in 1999. In 2001, they were awarded first place in the DC Jazz Mid-Atlantic Recording Competition. He is a Yamaha Performing Artist.

Butler has been on the faculty of seven colleges and schools, while teaching at a full-time private lesson studio for twenty-five years. He has taught Music Business, American Popular Music and Music Fundamentals for over thirteen years. Butler plays many styles, including rock and soul with the All Mighty Senators. Even with this boatload of accomplishments, this full-time musician and teacher feels that “MOST importantly . . . I am a husband and father of two beautiful daughters, three and seven years old.”

Butler’s life as a composer began when he started his group in the late ‘90s after he’d been playing for twenty years. The Eldersburg, Maryland resident’s early tune, “Nat’s Groove,” is a blues-based composition in 6/4 from his CD Lockout. One might expect that the title is a nod to Nat Adderley, but it was actually written for his dog. The title track is an aggressive, modern tune written in a minor key with “melodic and intense horn lines,” born out of frustration with a particular agent who wouldn’t book him.

Some challenges in composing have been “just getting started” and “translating what you’re hearing to the page.” Butler always wants to “find that happy medium between not writing too much (so the players have room to improvise/interpret) and . . . giving the piece some structure.” He loves “hearing the composition after it’s completed and . . . what it sounds like when musicians put in their interpretation.” During his musical evolution, Todd listened to quintet recordings, which are now his favorite ensemble to write for. “You have the opportunity to have some neat harmonies and interactions between the horns.”

Butler admires how Freddie Hubbard “made trumpet the lead voice—while having the saxophone go back and forth between playing with the trumpet and playing with the rhythm section.” From Hubbard’s album Hub Cap some favorite tunes are “Luana” and “Osie Mae.” Wayne Shorter’s “Witch Hunt,” “Fee-Fi-Fo-Fum,” and “Speak No Evil” are also among his favorites. “Wayne had a unique harmonic approach and wrote cool melodies,” says Butler. Some preferred Lee Morgan compositions are “Mr. Kenyatta,” “Cornbread,” and “Ceora.” “Freddie and Lee were both way underrated as composers,” Butler states.

While Butler claims to be “horrible” with lyrics, he would be “interested to see how some of my ballads would sound with lyrics.” For the Showcase, he’s putting together some pieces which “might have some Latin flavor or be something funky.” 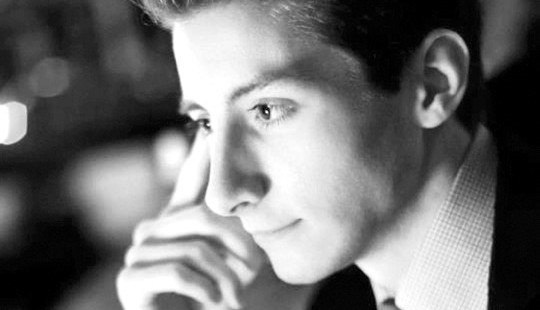 The youngest winner, trumpeter and vocalist Nico Sarbanes, is entering his junior year at McGill University in Montreal, Canada. While a student at Towson High School, Sarbanes was twice selected to lead the trumpet section in the Maryland All-State Jazz Ensemble, and in his senior year was selected for the All-Eastern Jazz Ensemble. At McGill, he has received the David Holt Award for excellence in jazz studies, the David Nutting Award for trumpet performance, the Calder Spanier Award for composition, and he has performed at the Montreal International Jazz Festival.

Sarbanes wrote his first composition in his last year of high school. “I had a lot of fragments and ideas before that, but I hadn’t written a melody that I really liked until then. It was a really bluesy tune, the A’s [A sections] sort of sounded like ‘Moanin’.’ I called it ‘Bawlmer’s Own.’” Sarbanes finds that his “greatest challenge, and subsequently the greatest reward,” is “writing melodies that I know will stick with people.” At this point, he definitely prefers writing for quintet or sextet. “All of my favorite groups . . . I have listened to or played in have been small groups. As I get better at it, I’m sure I could like [writing for big band] just as much as I do writing for small groups.”

Sarbanes admires all of the composers whose works make up the Great American Songbook (George and Ira Gershwin, Harold Arlen, Jule Styne, Jimmy Van Heusen, Cole Porter, Frederick Loewe, among others). Among jazz instrumentalists, he loves Clifford Brown, Lee Morgan, Sonny Rollins, Hank Mobley, Bobby Timmons, and the Adderley Brothers. “Clifford I love because each tune is just perfect and always expertly arranged. ‘Daahoud’ and ‘Joy Spring,’ and even his older compositions like ‘Tiny Capers’ and ‘Minor Mood,’ all have great arrangements. Hank and Lee, but to a greater extent Bobby Timmons and the Adderleys, I love because everything they wrote and played had a bluesy tinge to it. That’s the biggest thing to me: they never let go of the blues. I feel too many musicians today place a higher emphasis in their compositions on the intellectual, rather than the emotional. I’m just saying that you should always want your audience to be enjoying your work, rather than just enduring it.”

Sarbanes adds, “I haven’t written lyrics to any of my tunes, but I have written a few melodies with the intention of adding lyrics in the future. Since vocals are also a big part of what I do, it’s just a matter of time before I start writing some vocal tunes.” One of his works-in-progress is a “slightly more contemporary-sounding waltz. Another is a bluesy minor modal piece and another is a sort-of blues.” But by the time the Showcase comes around, “I could be choosing from an entirely different group of new compositions. I try to compose a little every day.” 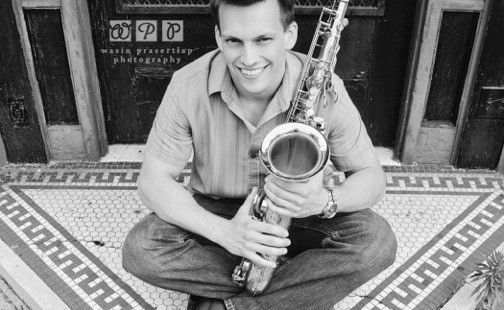 IAN SIMS
Saxophonist Ian Sims boasts a formidable number of degrees for someone not yet thirty years old: a Bachelor of Science in Electrical Engineering with a Mathematics minor from Johns Hopkins University; a Bachelor of Music in Jazz Studies from the Peabody Preparatory, concurrently with his engineering studies as a student in the Double Degree program; a Master of Arts in Audio Sciences with a concentration in Recording and Production from Peabody Conservatory; a Graduate Performance Diploma in Jazz Studies from Peabody.

The Stephens City, Virginia native completed the above programs with the help of numerous scholarships, fellowships and assistantships. His post-school workaday life shows no indication of slacking. Sims serves on the faculty of Peabody Preparatory where he works as an instructor in the Tuned-In program, which enables public school students to take private music lessons. Along with bassist/pianist Blake Meister, Sims is the Co-Director of a new effort at Peabody Preparatory – the Jazz Performance Academy – which “brings together highly motivated students in a collaborative and challenging environment to expand their repertoire and nurture the skills of improvisation.” He also previously taught woodwinds in the Baltimore Symphony Orchestra’s OrchKids program.

Sims is also the Jazz Studies Academic Coordinator at the Peabody Conservatory and the Chief Administrative Officer for “Jazz at the Johns Hopkins Club,” which has brought Chick Corea, Roy Haynes, Terri Lyne Carrington and others to Baltimore. “It was great to work with Gary [Thomas, Director of Jazz Studies at Peabody] on the roster of performers and hang out with them.” Sims also finds the time to perform regularly at many different types of venues in the region.

Sims began composing in his junior year at Peabody after encouragement from Thomas. His first composition was a ballad in three/four time. “I had a melody in mind and then went back and developed the harmony to go with it.” A big challenge for Sims is that “I’m never really satisfied. It takes a lot of revision before I want somebody to hear it.” But the satisfaction comes in “hearing your music performed!!! It’s pretty exciting, sharing that, getting it out there. I’ve tried taking the same tune and rearranging it for different sized groups. . . . I’m more comfortable with a nonet or smaller group.”

Some of Sims’s favorite composers and tunes include: Joe Henderson’s “Black Narcissus” and “Inner Urge” (for their energy); Gary Thomas’ s influential “Who’s In Control,” from the album Found on Sordid Street (his work has a lot of edge to it); and Woody Shaw’s “Moontrane,” which gave Sims a familiarity with the organ format. “The thing that strikes me is the individuality of a piece, hearing it and recognizing who wrote it.”

He doesn’t write lyrics. He thinks of “a melody, yes, but not words.” Collaborating with a lyricist “would add a new dimension to the situation.” Of his Showcase quintet piece, Ian says, “At this point, I have a sketch of the melody with some ideas for the harmony. I have the sound and the feel of it—medium swing.” 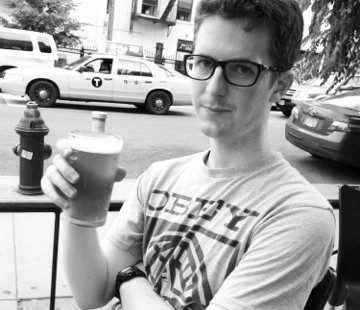 ETHAN HELM
Saxophonist Ethan Helm was born and raised in Yorba Linda, CA. His music education began with his father, a choral director and saxophonist, and a variety of Los Angeles-area professionals. He grew up playing clarinet and flute and also sang in choirs. Helm graduated from the Eastman School of Music with a Bachelor’s Degree in Music, specializing in jazz saxophone in May, 2012. Currently residing in New York, Helm will begin his Masters program in jazz studies at NYU’s Steinhardt School this fall.

Helm played multiple woodwinds and wrote arrangements as a member of the 2009 Disney All-American College Band. He also participated in the 2011 Banff International Workshop in Jazz and Creative Music. While with the Eastman Chamber Jazz Orchestra, under the direction of Dave Rivello and Ryan Truesdell, Helm performed at the Umbria Jazz Festival (Perugia, Italy). He frequently crosses genre boundaries in collaborations with a variety of pop, rock, and classical musicians, including local projects with Baltimore natives Noah Berman, (jazz & indie rock guitarist) and Louis Weeks (singer/songwriter/composer).

Helm began composing in the eighth grade for a statewide arts competition, and his three-minute solo sax composition incorporated styles from new jazz to blues to classical etude. Later, he wrote for big band and combos (including a saxophone quartet) in high school and college. He enjoys creating interesting compositions, but also likes to provide opportunities for each instrumentalist to shine. It’s gratifying, he says, “hearing the final piece work at least once in performance.” Although Helm has had the most experience writing for six- to eight-person ensembles, he has discovered that writing for groups of all sizes can also be rewarding.

Helm feels that “everything Duke Ellington wrote was a masterpiece. In “ ‘Rockin’ in Rhythm,’ all of the elements of the piece combine at the end. I am always so taken by the way he writes such colorful ensemble harmony but still finds room to let the singular voices of the soloists (Harry Carney, Johnny Hodges, Cootie Williams, et al.) express their individuality. I also really like Gil Evans. His album The Individualism of Gil Evans is especially haunting.” Helm also spoke highly of a modern composer, Argentinian pianist Guillermo Klein. “His compositions are so fresh and memorable and interesting. I really like his album Una Nave.”

Although he tends to write instrument-specific compositions, Helm suspects that his pieces are “sometimes too fast, too weird, too angular for vocalists and lyrics.” As for his piece for the showcase, which is his first for a competition, “at the moment, it’s a pretty big mess. It will definitely be swing . . . but, reconciling the jazz tradition and something experimental throughout the piece, [I’m] seeing if I can make things fit.”