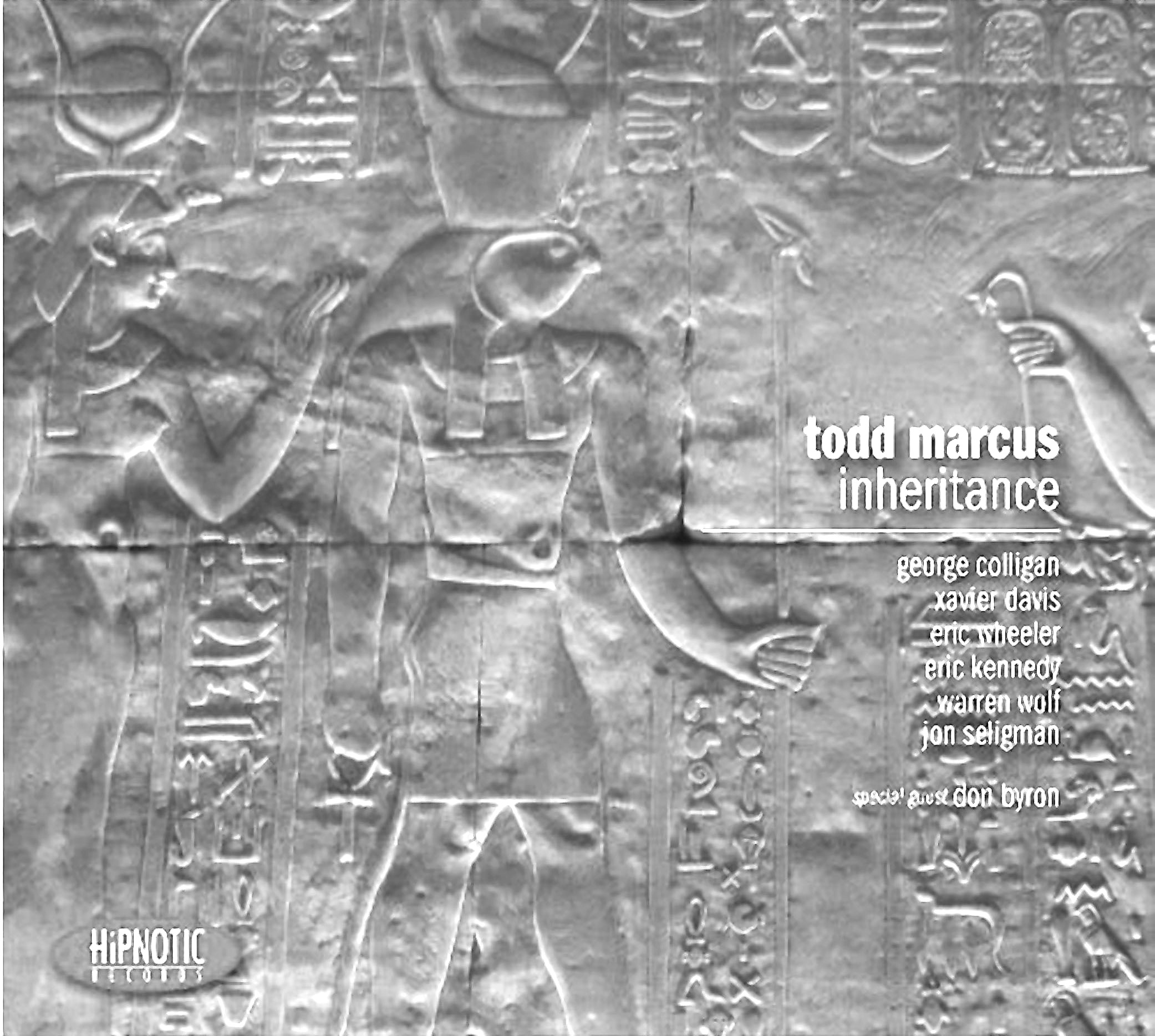 When we think of bass clarinet most of us tend to think of Eric Dolphy, Bennie Maupin, or maybe even Harry Carney from the Duke Ellington Orchestra. That was true as recently as just a few short years ago. Not anymore. Todd Marcus has established himself as THE voice of the bass clarinet in this generation. This is his second CD, as he continues to develop themes that explore his roots in American and Egyptian musical cultures. It seems to be working for him. I’m not the only one who thinks so. National Public Radio has declared Inheritance one of the Top 10 of 2012.

It’s no easy compositional task combining the two musical cultures without sounding hokey and snake charmer-ish. Marcus hurdles that difficulty with ease. From the romping opening track, “The Adventures of Kang and Kodos,” you clearly know this is straight-ahead jazz. It’s a grab-the-arms-of-your-chair tour de force that Marcus leads with virtuosity normally expected from a tenor saxophonist. Driven by Warren Wolf on drums (not vibes), this track alone establishes this CD as a must-buy item.

Even if you don’t understand intricate technical drum craftsmanship you will smile from ear to ear listening to Wolf’s drum fills on Thelonious Monk’s “Epistrophy.” Marcus’s fresh approach to this standard is matched by his arrangement of Ray Henderson’s “Bye Bye Blackbird.” Despite the inventiveness of the arrangement, the listener will be compelled to sing along with it. The funky, engaging and slightly humorous treatment has the musicians effortlessly floating through the individual solos in 7/4 time without the listener even realizing it’s an odd time signature.

Marcus has chosen some excellent co-participants for this project. The versatile bassist Eric Wheeler flows through each composition as if he had written it himself. Eric Kennedy’s beautiful rhythmic and melodic treatment of the five compositions on which he is included has to be heard with eyes closed in order to capture its essence. New Yorker Don Byron’s fluid clarinet adds impressive harmony and color to “Herod” and “Solstice” in a manner reminiscent of Duke Ellington’s “Black and Tan Fantasy.” Xavier Davis, a longstanding Berklee faculty member and young piano master, provides spiritually calming support on “Solstice,” and George Colligan also plays passionate piano the tracks on which he is featured.. But it’s Todd Marcus’s concept, compositions, soloing and choice of musicians that make this CD a must-have item.

Just as the CD opens with fervor on “The Adventures of Kang and Kodos,” so it also closes with an equally passionate title track, “Inheritance.” Wolf’s soloing during the ending vamp reveals the influences of Philly Joe Jones, Max Roach, Tony Williams, Elvin Jones and Baltimore’s Dennis Chambers.

Inheritance is an artistic expression of Todd Marcus’s American/Egyptian heritage as well as a tribute to the legacy of our multi-cultural society. I give it five stars! To learn where to purchase the CD visit: toddmarcusjazz.com.