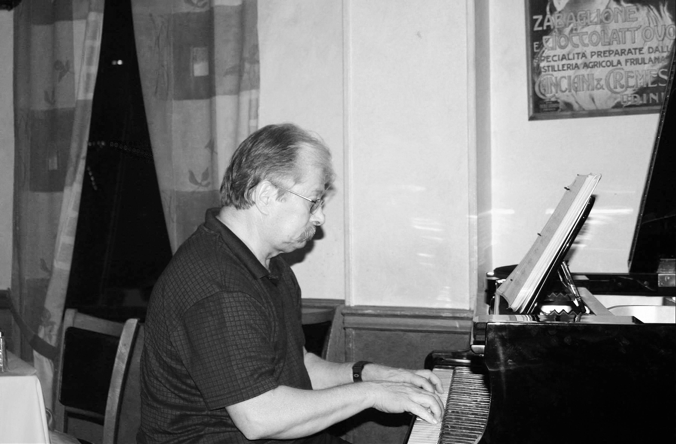 Once again I visited the acoustically superb Germano’s Cabaret in Little Italy, this time to enjoy “An Evening of Jazz Piano with George Spicka.” Spicka was joined by his long-time associates, bassist Phil Ravita and percussionist Nucleo Vega. Charlene Cochran, the vocalist who often appears with this trio, was absent, attending to damage caused by Hurricane Sandy.

The program, comprising original jazz compositions by Spicka and Ravita, was more than an exhibition of style and technique over standards. The trio transported the audience from places close to home to faraway lands and even into outer space.

The first tune was “Seventh Hour,” written in the early ’70s while Spicka was gigging on the road. It had a Monkish opening with some creative dissonances but then got rolling with a more upbeat tempo. I heard a bit of Nelson Riddle’s “Theme for Route 66” in one right-hand run, just enough to spark “road trip” in my mind, and it set up the rest of the evening’s underlying theme.

Next we were taken to “Western Avenue,” a tune written by Spicka in 1980 when he was living in Silver Spring. The tune is built around chordal harmonic tensions (à la Bill Evans) but delivered with much firmer hands. The soul of Spicka’s music lies in the choice of notes he puts in his chords. Ravita and Vega solidly backed Spicka and soloed superbly.

Then we were off to the Southern hemisphere with the Latinesque “My Cha” from 1999; this tune is more Villa-Lobos than Chick Corea harmonically, but was played with fiery passion. Ravita then presented something different with a 2011 piece entitled “Something Different,” which opened with a gnarly 7/4 fusillade of notes and riffs, smoothing out to a 4/4 swing that snapped and crackled, blending the opening dissonances with creamy tonality. Mmm, tasty! Spicka soloed on the most introspective piece of the evening, “Ashen Rainbows,” an atmospheric melody with waves of sound that rose and fell in and out of darkness into light.

The first set ended with Spicka’s newest piece, “S.E.T.I.”(Google it ). Ravita switched to six-string electric bass and the trio blasted off in a polyrhythmic, controlled frenzy, soaring to a lilting apex, followed by a tension-filled free fall descent. Ah! They landed safe and sound.

The surprise of the evening was when Spicka coaxed my son, Edison Dean Estes, to play his own composition/improvisation, “Edison’s Blues Thing.” Edison, who has been studying with Spicka for three years, played with enough feeling and confidence that the audience applauded with genuine enthusiasm.

The second set erupted with “Interpredations,” an upbeat swing tune from 1980 that charged straight ahead. Downshifting one gear to a medium swing—“Dawn”—that usually features vocalist Cochran, the trio adroitly made up for her absence. It was interesting that the song’s melody lies inside of the chords rather than being embellished by them. Ravita’s wonderfully surreal second tune, “Violet Echoes,” had me thinking of Martian spiders bouncing off walls. So much fun!

Spicka brought us back to earth with “Halcyon Summers,” a piece as nostalgic and fun as sandlot baseball. “Emerald Raindrops” was a lovely bossa nova in which the beautiful melody was heard right up front. The set ended with “Huh?,” a Monkish, modal, upbeat piece that brought the evening to an exhilarating end. Vega got in the most amazing solo on this one. Totally atomic, man!!

“An Evening with George Spicka” was an exciting and reflective journey. He is a thoughtful player and composer—color him cerulean blue. Phil Ravita’s bass is a deep warm mahogany. Nucleo Vega brightly expresses gold and silver percussion. This is a beautifully well-balanced trio well worth seeking out when you want to hear some great jazz compositions.

One thought on “An Evening of Jazz with George Spicka”