On Saturday, October 13th, Jazzway 6004 inaugurated Howard Katz and Marianne Matheny-Katz’s sixth year of first-rate jazz events, presenting saxophone phenomenon Sam King, who led a splendid quartet of accomplished players that included Justin Taylor, piano; Amy Shook, bass; and Robert Shahid, drums. Sam King is a 24-year old bebop player who is creating a huge buzz in the region, being compared to Charlie Parker and other jazz giants. King demonstrated with his performance what he later expressed in words to the audience: “I love jazz from the bottom of my heart.” The event was all about the music, with improvisations infused with playfulness and joy. 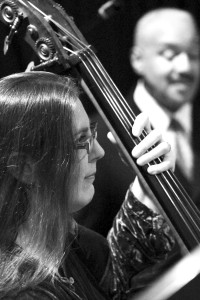 Marianne commented after the show, “Sam King is actually the very first artist I’ve booked at Jazzway without hearing him. I never do that. But the number of people who recommended him to us was overwhelming — a groundswell really, and these are all people whose musical taste I respect.”

“At Jazzway we are particularly committed to supporting emerging artists who deserve wider recognition, and it seems very appropriate to start our sixth season off with Sam, who clearly fits into that category. We may make it a policy to open our future series with a developing artist each year.”

“Sam’s soloing seems effortless and his improvisational ideas appear to be endless. He is so sincere in his music, so completely comfortable and engaged with his musicians and the audience when he’s on the bandstand, it’s hard to believe he’s so young.”