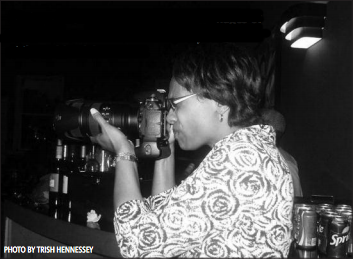 When I arrived at the Eubie Blake National Jazz Institute and Cultural Center at 847 N. Howard Street, I didn’t feel the air-conditioning. June 13th was decidedly summer-like, and the thought crossed my mind that there were going to be some seriously sweaty musicians at this jam! The truth is that the artists celebrated at Eubie Blake Center—Billie Holiday, Cab Calloway and Eubie Blake himself—didn’t have the luxury of a box blowing cold air on them. Our elder statesmen and stateswomen of jazz who are still with us can also recall times when they almost didn’t make it through a set because of the heat.

This jazz jam (and networking event), which began in May, is scheduled for the second Wednesday of every month. It’s early to state with certainty, but I’m betting that this monthly event lasts for a long time. Such amazing talent under one roof—whether younger or older—and each played with a sense of purpose. These were musicians— ready, able and intent on performing standards. That’s the theme of this jam, The Standards.

Craig Alston was admirable in his role as host. We know Craig as the awesome multi-instrumentalist who makes any gig better, but he also has a niche in this regard. He was adamant about being fair to the musicians who had signed on for the night. And he was astute in putting artists together who seemed to “get” one another. This alone would have been magic, as we witnessed from 7:30 on, but Craig was on a mission. He took the microphone and spoke from his heart about jazz. Many in the audience bobbed their heads in approval and understanding as our host encouraged us to stay positive about the genre that we love so much. He implored us to raise one another up and support each other’s jazz efforts whenever possible. His message hit home.

This particular jam is a golden opportunity for likeminded friends to catch up socially and musically. How wonderful to finally meet great people whom we only knew via Facebook! Thank goodness for opportunities like this to mingle with those who actually make musical connections and put them on paper. Future get-togethers were discussed and firmed up. Business cards were exchanged. The word “exciting” doesn’t cover it! Besides the harmony of instrumentation by knowledgeable students and teachers, there was an honest sense of goodwill and a promise of better days ahead.

Warm and encouraging shout-outs to the jazz ladies who turned out—this was thrilling! The same can be said about the night in general. Eubie Live! on the fourth floor was cookin’, and it wasn’t just because there was good wine for sale! Many of our best came out to support this project; from it, many more ideas will develop and create a domino effect of positivity. And here’s what else assures an ushering in of the jazz renaissance that is happening in Baltimore: the lingering of those aforementioned ghosts, the jazz legends who lived and passed on the music in this charmed city. They were there that night. And they will be there again on July 11th—smiling.