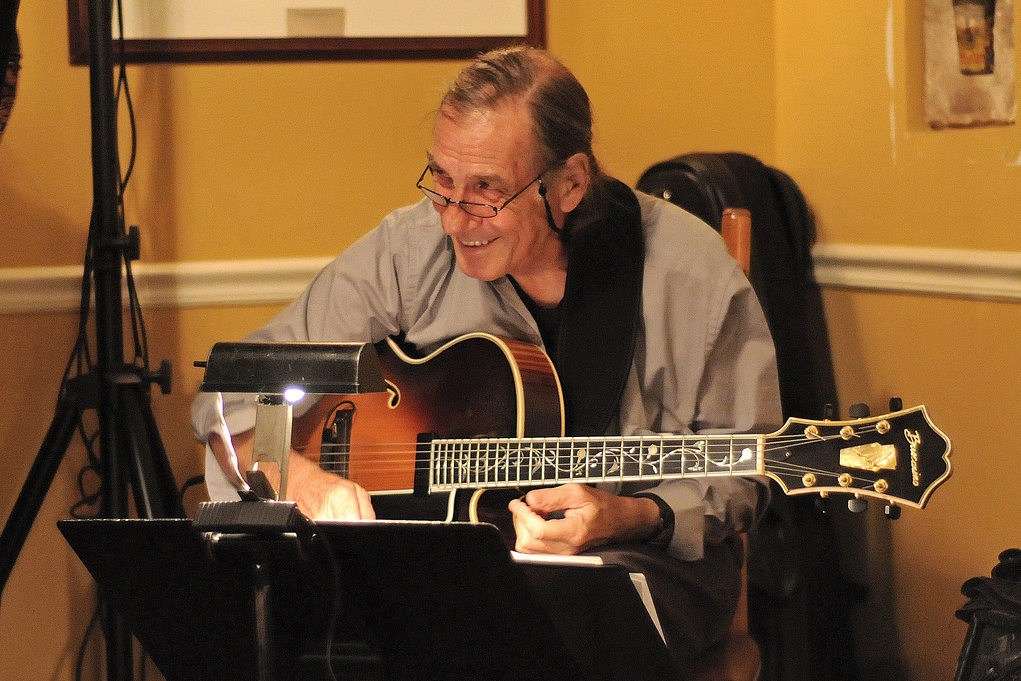 These days musicians might consider a monthly gig that lasts one year as quite a milestone. Now consider this. Guitarist Paul Wingo has played in the bar at Bertha’s Restaurant virtually every Tuesday night for the past thirty years!

Here’s how it all started. After a long process to get his restaurant’s zoning changed to allow live music, Tony Norris put in a piano and planned to have Billy Colucci play there every Tuesday. Norris spread the word. Colucci, however, had neglected to mention his imminent move to New York. Fortunately, Norris heard Paul Wingo play at a party in Fells Point and liked what he heard. Wingo was available on Tuesdays, and the deal was struck. No one remembers the exact date he started, but the year was 1982.

Wingo remembers how the music began. “I started with Drew Gress on bass. Tony Norris put us together. After awhile Paul Langosch came in on bass and we added Mike Smith on drums. They’d been playing together for so many years that it was piece of cake playing in front of them. Then we had Chuck Karner on drums, then Phil Cunneff, Mike Sheppard. Now it’s Jeff Reed on bass and Mike Kuhl on drums. It’s just magical what occurs there every night, the oneness that occurs. I like to think of it as one guy playing three instruments.” Wingo has high praise for bassist Reed. “Jeff is a genius. . . . He’s an amazing bass player, the heartbeat.” About his current drummer, he adds, “Mike’s been studying all kinds of Eastern rhythms and brings that to the jazz. It knocks my socks off.”

Reed began substituting for Paul Langosch eight or ten years ago, then alternated with Jeff Lopez. He estimates that he has been full-time for the past six years. About playing with Paul Wingo, Reed says, “Oh, it’s awesome, man. He’s super laid-back, one of the most open musicians. He does do things leaders need to do, but you don’t feel any resistance if the other musicians take it in a different direction.” He adds that Wingo brings mammoth brown folders filled with charts of tunes. “They’re completely out of order, but he somehow knows where everything is. You could call for, say, ‘Israel’ (a bop era tune by trumpeter John Carisi) and he’s found it in no time.” Reed adds that Wingo is pretty good at handling homeless people who occasionally walk in. “He does it without being condescending. He’s a really sweet guy and that adds to the vibe.”

Also adding to the vibe are the room itself and the employers’ attitudes. “It’s a great room to play,” says Wingo. “Joe La Barbera (drummer for Woody Herman, Chuck Mangione and Tony Bennett) came in on drums one night and said it’s one of the nicest jazz rooms he’s played. It feels at home to me.” Norris has always given Wingo full autonomy. “It’s his gig,” says Norris. “They really never tell us what we have to do,” Reed adds, “like about the volume or the length of sets. It ends up creating this vibe of real freedom. I really feel I can be myself as a musician. Andy, Norris’s son, says, “I want you to come in and do your thing.” It’s rare. They just want good music.”

Asked why he has stuck with jazz for so long, Norris, who plays and teaches classical guitar, makes the reason sound simple. “That’s what I grew up listening to. I just like it and like to promote that kind of music. My son also grew up with it.” He proudly drops the names of well-known jazz musicians who have played at Bertha’s—Al Cohn, Joe Cohn, Ron Diehl, Butch Warren.

I asked Wingo if, after thirty years, he ever gets tired of the gig. “Tired? Never. Every now and then I ask myself what I’m doing driving all the way from Olney to Baltimore. I went to the Creative Music Studio in Woodstock, New York, in 1976. Karl Berger was the creative energy behind it. Berger said that if it wasn’t for the musicians of New York City coming out and playing every night, that place would just be rubble. It’s our job to cool off the city, to bring that energy. My mission is to create love, peace and oneness. The music is a powerful force to create that, filtered through us musicians. People look for a place to rejuvenate. I know it rejuvenates me.”